You are here: Home / Archives for Brushes With Greatness 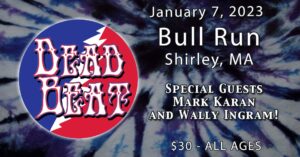 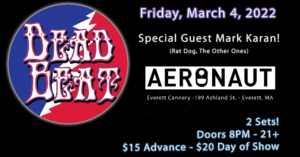 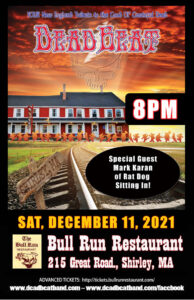 SETLIST: 2021-12-11 Bull Run w/ Mark Karan. {Tonight was such an incredible blast, and we are so grateful to all of you for making it so!} Jack Straw > They Love Each Other Harder they Come Tennessee Jed Cassidy Wang Dang Doodle Mississippi Half-Step I’ve Got a Feeling Deal* (MK lead vocs) Scarlet Begonias > […] 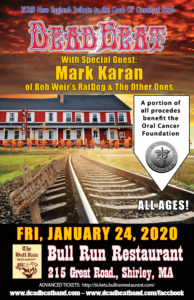 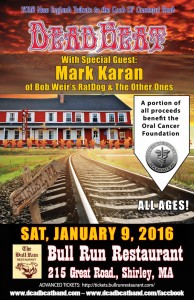 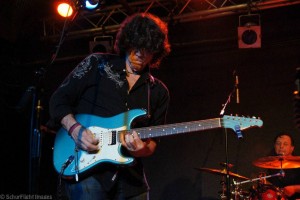 Over the last few months, DeadBeat (Your Grateful Dead party band) and Mark Karan (The Other Ones, Bob Weir’s Rat Dog) have performed three concerts to benefit the Oral Cancer Foundation and the Dana Farber Cancer Institute. The gigs, in Boston, MA; Dover, NH; and Westerly, RI raised $7500 for the Oral Cancer Foundation and $5000 for oral cancer research at Dana Faber Cancer Institute. 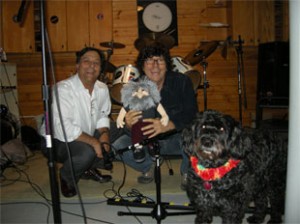 On 2/9/13, at precisely 11:30PM, 40 Grateful Dead tribute bands around the word played “Eyes of the World” as part of the Eyes Around The World event. DeadBeat was scheduled to perform, with the great Mark Karan as guest guitarist, at a club in Southern NH that night, but alas a massive blizzard shut down New England for a couple of days and the gig was cancelled. Not be be deterred, our intrepid heroes braved the road hazards and assembled with Mark at DeadBeat’s rehearsal studio and played eyes at exactly 11:30PM. 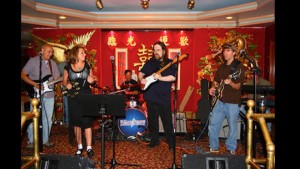 A big ‘thank you’ goes out to Jeff Mattson from Dark Star Orchestra who stopped by after their show in Boston on Friday June 1st to sit in on a few songs with DeadBeat. Jeff and Brian traded some smokin’ leads on Deal and Sugaree. Jeff played and sang Tangled Up In Blue and he ended with a fine Scarlet Begonias into Fire on The Mountain then into Eyes. A memorable night for all us in DeadBeat.